The prestigious Black Rock Songwriting Camp and SOCAN – the Canadian Society of Composers, Authors and Music Publishers – have partnered to collaborate on producing future music creation camps on the Greek island of Santorini, held twice annually.

Under the agreement, SOCAN will have two writers join each camp going forward, working towards the organization’s mandate to foster the careers and business of its members.

Since being founded by Kostas Kalimeris and Leonidas Chantzaras, Black Rock Songwriting Camp has become one of the premier writing camps in the world, and since then has hosted approximately 160 music creators from all over the world in eight camps.

The camps are held at the spectacular Black Rock Studio, known for clients such as Justin Bieber, OneRepublic, Joe Bonamassa, and other renowned music creators.

“I am proud that we could team up with SOCAN,” said Chantzaras. “The organization’s passion for the songwriter and music is unique and inspiring.”

Kalimeris commented, “I’m so fired up about Black Rock Studios joining forces with the esteemed SOCAN. We are raising the bar of music writing with even higher standards of quality.”

“I’ve been involved with the Black Rock team for several years and have seen the solid results that come from these camps,” said Chad Richardson, General Manager of SOCAN’s Los Angeles office. “SOCAN is excited to be giving our members the opportunity to contribute and shine at Black Rock.”

SOCAN songwriter member Laurell Barker, one of the many music creators to benefit from the camps, remarked, “Black Rock Songwriting Camp was an amazing opportunity to collaborate internationally, glean new writing perspective, and create some amazing songs that have already captured publishing interest and further invitations to write around the world.”

SOCAN is a member-based organization that represents the Canadian performing rights of more than four-million Canadian and international music creators and publishers. SOCAN is proud to play a leading role in supporting the long-term success of its more than 135,000 Canadian members, and the Canadian music ecosystem overall. SOCAN licenses more than 125,000 businesses in Canada, and distributes royalties to its members and music rights organizations around the world. SOCAN also distributes royalties to its members for the use of their music internationally in collaboration with its peer societies. www.socan.ca

Founded by Kostas kalimeris and Leonidas Chantzaras, BLACK ROCK SONGWRITING CAMP is one of the premier writing camps in the world, located on the greek island Santorini.

Taking place, twice a year at the well known Black Rock Studios (One Republic, Joe Bonamassa, Justin Bieber, Bring me the Horizon and Sido), 24 writers from all over the world get invited to create new songs.

The songs created during the camp are pitched to labels around the world. 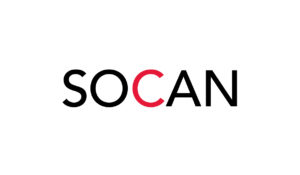